The Free and Hanseatic City of Hamburg is one of Germany’s 16 federal states and the second largest city in Germany. The Hamburg metropolitan region is home to more than five million people. Working near its busy port (3rd busiest port in Europe) has always defined Hamburg’s socio-economic environment, making it one of the industrial hotspots in Northern Germany. Over 40% of goods entering the Hamburg port are put on lorries onward to the Hamburg hinterland. The revised Hamburg Climate Plan, which was adopted in December 2019, requires a 55% reduction in climate emissions by 2030 compared to 1990 baseline.

Metropolitan cities like Hamburg are confronted with the challenge of modernising important national and international transport hubs. Three out of nine major European transport arteries – the TEN-T corridors –intersect in Hamburg. Around 40,000 trucks drive into the Port of Hamburg every day, and more than ten percent of all rail freight journeys in Germany start or finish there. Each day, around 500,000 people commute to and from Hamburg. All forecasts predict that traffic will further increase on transregional transport routes. Digital transformation and the use of digital technologies will play a key role here.

Hamburg has been a testbed for innovative logistics solutions to handle the sharp increase in deliveries. Learning from these pilots, a significant solution is (company-independent) consolidation of goods in microhubs with last-mile distribution using cargo-bikes or by foot. An evaluation of a micro-hub pilot carried out by UPS in the Hamburg city centre confirmed these positive effects and a study on last-mile logistics concluded that 100-150 micro-hubs would be enough to shift 40% of last-mile deliveries to cargo-bikes.

Hamburg wants to benefit from these opportunities and improves its use of digital technologies to make transportation more efficient, safer, and more environmentally friendly. By adopting the Intelligent Transport System (ITS) Strategy in Hamburg on 26 April 2016, the City of Hamburg has now taken an important first step towards “Transport 4.0”.

Overview of the first set of measures

The Living Lab Hamburg envisions the pilot implementation of different measures in the framework of MOVE21. A central element in the concept of the Living Lab Hamburg is the conceptualisation and pilot implementation of multi-functional ‘neighbourhood hubs’ that will include offers regarding mobility for people and logistic as well as social/cultural aspects. Logistic measures considered include neighbourhood-scale logistic operations of storage, delivery, and pick-up. The focus will be on last mile deliveries or first mile pick-ups via cargo bikes. Mobility measures will be addressed, for instance, on passenger micro-mobility, sharing or on-demand solutions, or complementary to transportation measures, such as bike workshops or self-repair and service points. Specific uses involving social and cultural actions are planned to be implemented in hubs with available space for actions of this type. These uses aim at adding social value enhancing the social buy-in connected to the feeling of ownership.

In addition to the pilot implementation of multi-functional ‘neighbourhood hubs’, the Living Lab Hamburg will address the inter-hub logistic traffic. In order to reduce the traffic of the individual carriers, consolidation of cargo is considered.

A third element addressed by the Living Lab Hamburg is the combined transport of people and goods. The use of on-demand shuttles is one option, but also other services are being considered for analysis, simulation and, if feasible, pilot implementation.

The focus area of the activities of the Living Lab Hamburg is the District of Altona. Situated in the Western part of the city and bordered by the river Elbe to the south, Altona with its 275.000 inhabitants includes neighbourhoods with very different population and building density and characteristics. The Living Lab Hamburg is envisioning activities in the dense core area of the district, located in the eastern part of Altona, as well as activities in one or more of the northern, rather sub-urban neighbourhoods. In addition, the industrial areas in immediate vicinity of the national highway and TEN-T corridor A7 are planned as test site.

The concept of the Living Lab Hamburg foresees a phase-based approach in order to ensure that the different measures can build upon each other, and experiences and lessons learnt can be considered already during the project duration of MOVE21. The iterative approach includes the following four phases (figure 1):

Plan for the implementations of solutions

The Living Lab Hamburg conceptualised, and pilot implements various innovative aspects. These include:

If you have ideas or suggestions that can be useful, please do not hesitate to contact: 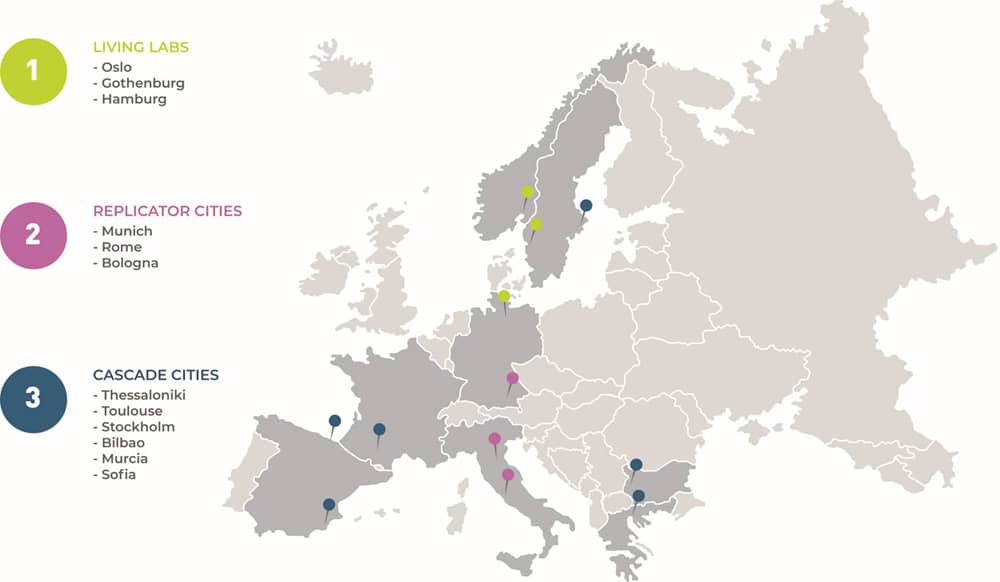